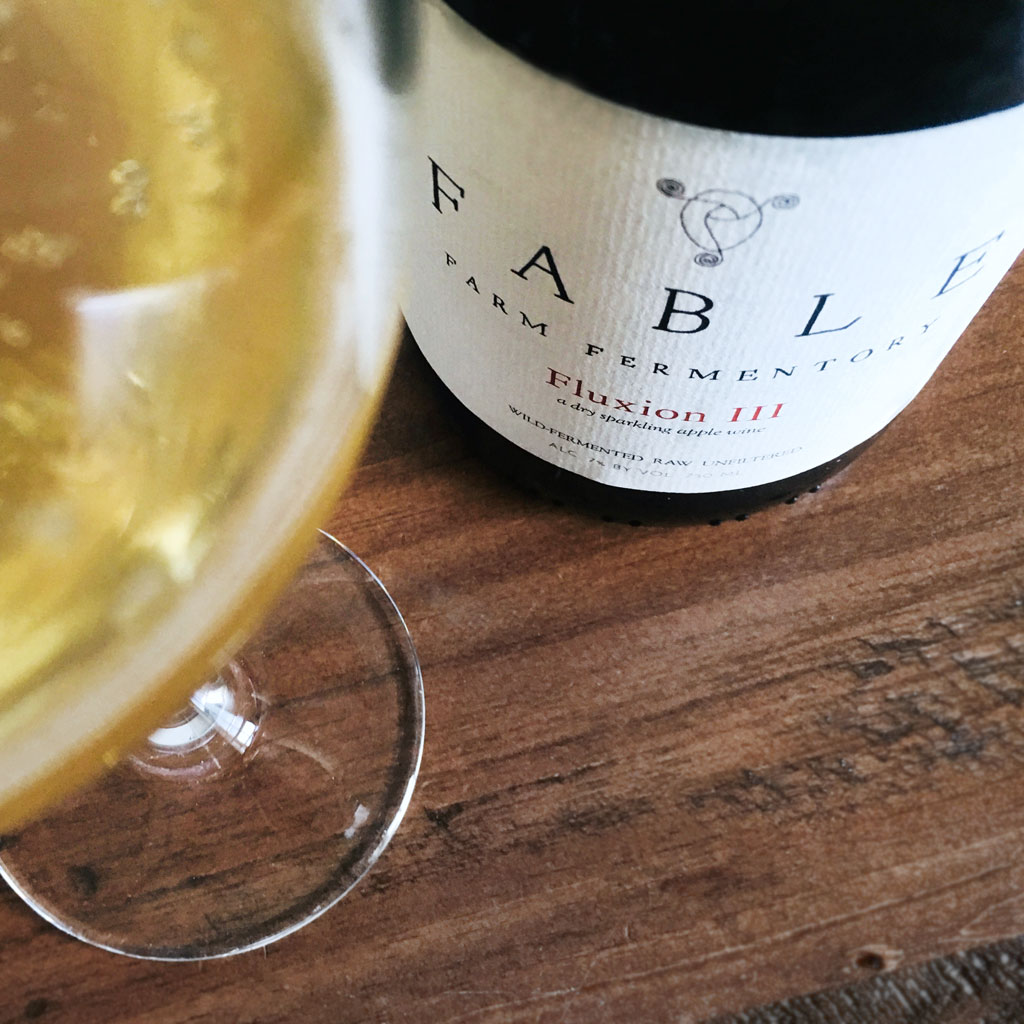 Fable Farm Fermentory is a new effort in the hills of Barnard, Vermont, a frigid, high-latitude terroir that’s become an unlikely hotbed of vinous experimentation with the success of neighboring La Garagista, five miles away as the crow flies. The two farms share a sensibility, a back-to-the-land aesthetic that uses old-fangled methods to produce elixirs that feel wholly new.

The Fermentory is a sub-project of Fable Farm, a collaborative sprawling across 850 hilly acres. The historic homestead has been stormed by a team of like-minded revivalists who have rebooted the farmhouse as an event venue and the barn as a cantina. They also maintain a market garden, farm stand, and CSA, and host community celebrations. In short, they’re scratching a living from this plot of earth by doing what Vermonters have done for centuries: a little of this, and a little of that.

And a little cider. Brothers Jon and Christopher Piana are the heroes of that operation, and while there is no orchard, not yet, anyway, they’re in the process of planting one. Because it can take fifteen years for apple trees to come fully online, the Pianas are meanwhile sourcing heirloom apples from regional orchards, and supplementing their haul by gleaning feral fruits from the countryside. Their goal is that felicitous mix of sharps, bittersharps, sweets, and bittersweets that yields a cider of depth and complexity.

Once the fruit is in the barn, production is time-honored. They sweat the apples prior to milling, and often allow the pomace to macerate briefly, an oxidative process that modulates its pectins and tannins and kick-starts fermentation. Sometimes they incorporate herbs or honey, or grapes sourced from regional vineyards, including La Garagista.

After pressing, the juice is moved to neutral oak barrels or glass demijohns to ferment in the cool darkness of the cellar. Once they have angled toward dryness, lots are blended into specific cuvées. Fable offers both still and sparkling forms, the latter made by either ancestral method, finishing its first fermentation in the bottle, or traditional method, fermented dry then dosed with a tirage of honey or maple syrup for the prise de mousse. The ciders are always unfiltered and un-sulfured. 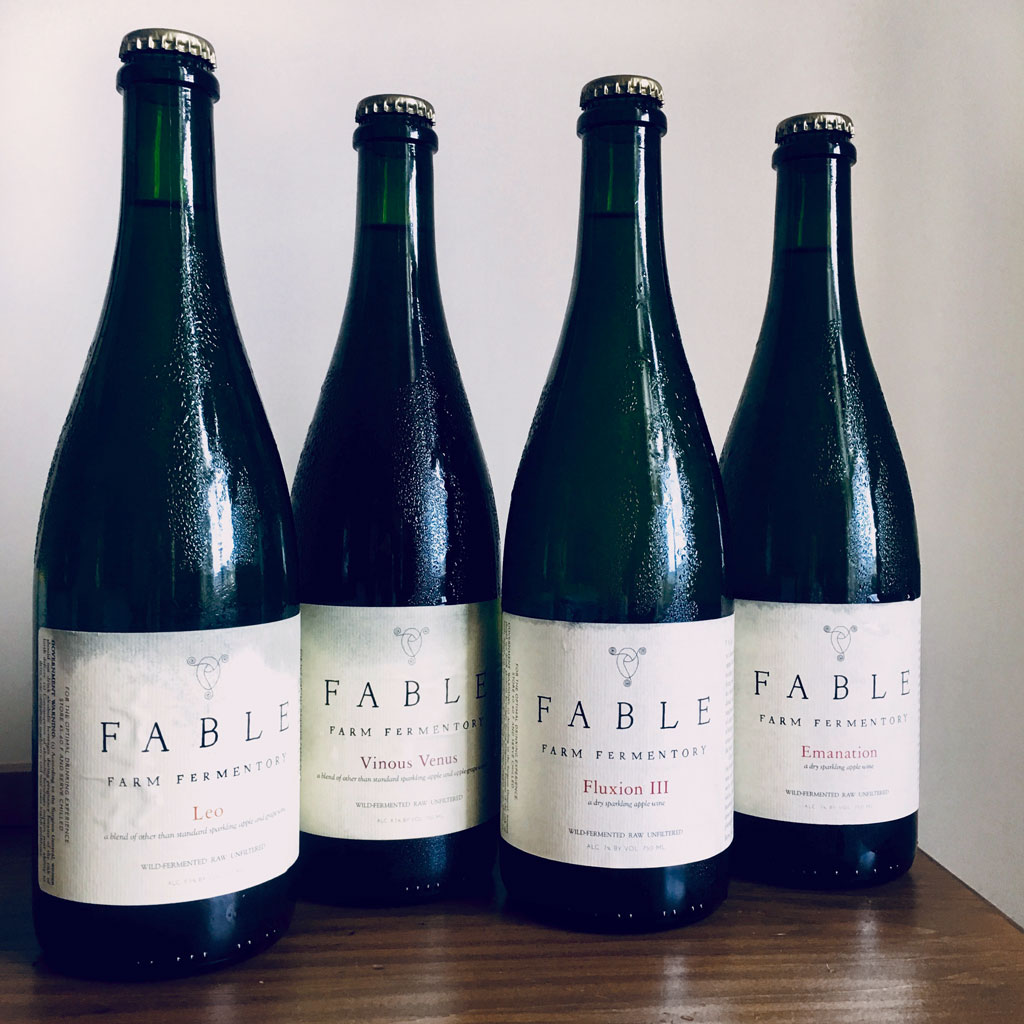 I recently scored four bottles of Fable’s tiny production at Mad River Taste Place in Waitsfield, Vermont. Two of these were made solely from apples, while two included grapes in the blend (see my tasting notes below). They were revelatory: dry, savory, detailed, deep, gastronomic. The apple-grape experiments in particular are among the most exciting beverages I’ve tasted this year. But what shall we call them?

Let’s back up. The United States Association of Cider Makers’ cider style guide (177K PDF), first published in late 2017 and currently undergoing an update, classifies cider and perry in broad categories, adding specifics for specialty styles. The most significant break point in the nomenclature is between so-called modern ciders, made from table fruit, and heritage ciders, made from heirloom or wild apples. Modern ciders tend to offer straightforward apple flavors, while heritage ciders are more complex. Fable’s apple-only products are heritage ciders.

But what about those ciders that blend in other fruits? The USACM guide suggests fruit ciders, while the federal government, specifically the Alcohol and Tobacco Tax and Trade Bureau, which regulates beverage labeling and taxation, suggests fruit wine. I reached out to Michelle McGrath, USACM’s executive director, for clarity on Fable’s line. “These ciders are both a fruit cider and a fruit wine,” she told me, while admitting it’s not always clear cut. “The truth is there is a lot of grey area. But in general, if cider is the primary ingredient and grape is a secondary ingredient, I’d consider it a fruit cider.”

Fable Farm, for their part, calls it, simply, wine, and their website offers a lengthy treatise on their cider-as-wine philosophy. They reason that wine is just fermented fruit, and the fruit doesn’t matter.

I’m sympathetic to their point, because calling their production wine is a way of distancing it from the simple commodity ciders now flooding the market. But I’m not ready to scrub cider from the vernacular, especially not as the category is gaining toehold in North America. When people hear wine they think vine, not orchard, and we miss the opportunity to show that fermented apples can be just as complex, interesting, and delicious as fermented grapes.

At the very least, let’s call it delicious. 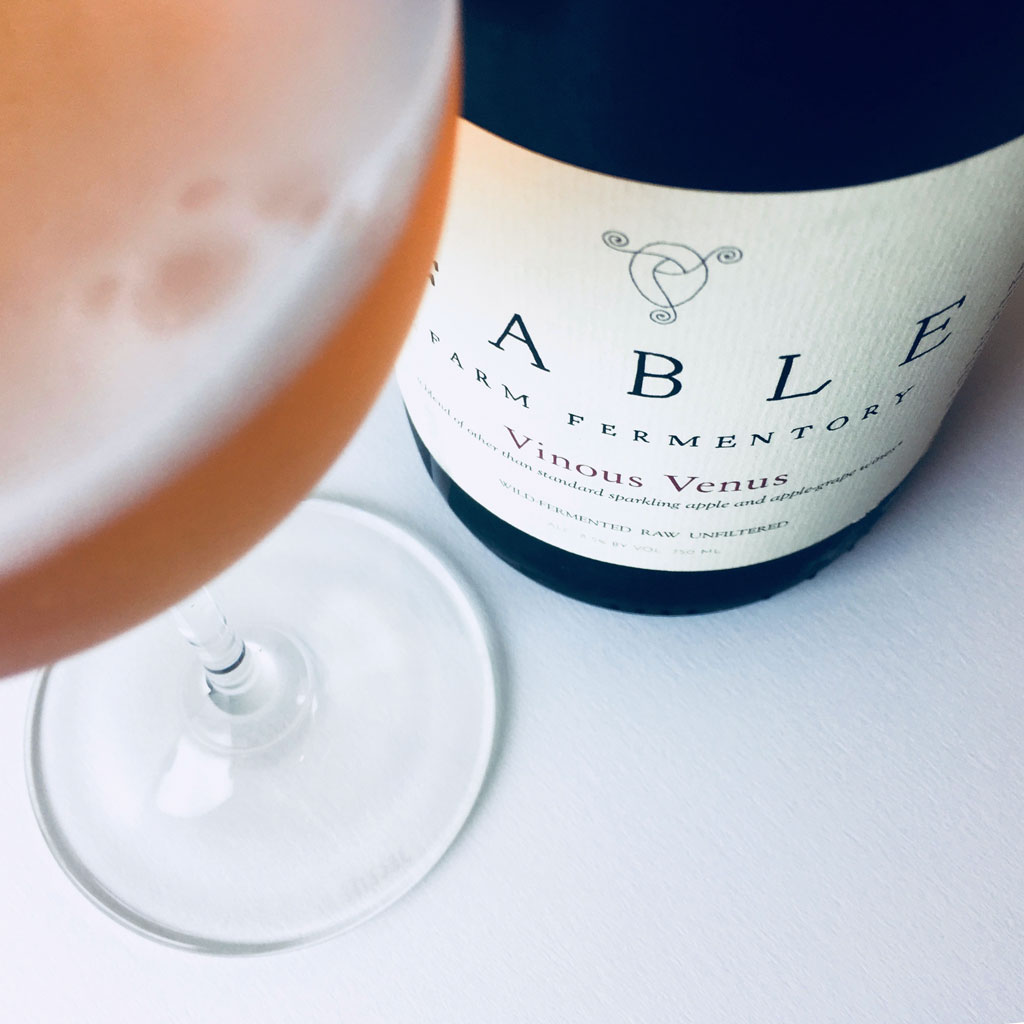 Wild apples from 2017 were collected and fermented with ambient yeasts in stainless steel tank for two months, after which the cider was moved by gravity and bottled to finish its fermentation via ancestral method. The results are fully dry and lightly sparkling. The pour creates a spumy head, but the body feels more pétillant than mousseaux. The flavors are savory-leesy with suggestions of russet apple and biscuit, dried straw, and chestnut honey. A hint of earthy funk adds gravitas, while scintillant acidity refreshes the back palate.
7% abv | $19 (750 ml.) | 210 cases made

A blend of wild apples from the 2015 and 2016 harvests, the fruit fermented with ambient yeasts and aged in barrel prior to blending. At bottling, the liquid was dosed with a tirage of maple syrup to kick-start the second fermentation. The resulting cider is bone dry with a creamy, tender mousse redolent of beeswax and chestnut honey, yellow apple skin and straw. It’s deeply savory from the bottle conditioning, but the finish crackles with a snappy, almost bitter bite.
7% abv | $20 (750 ml.) | 200 cases made 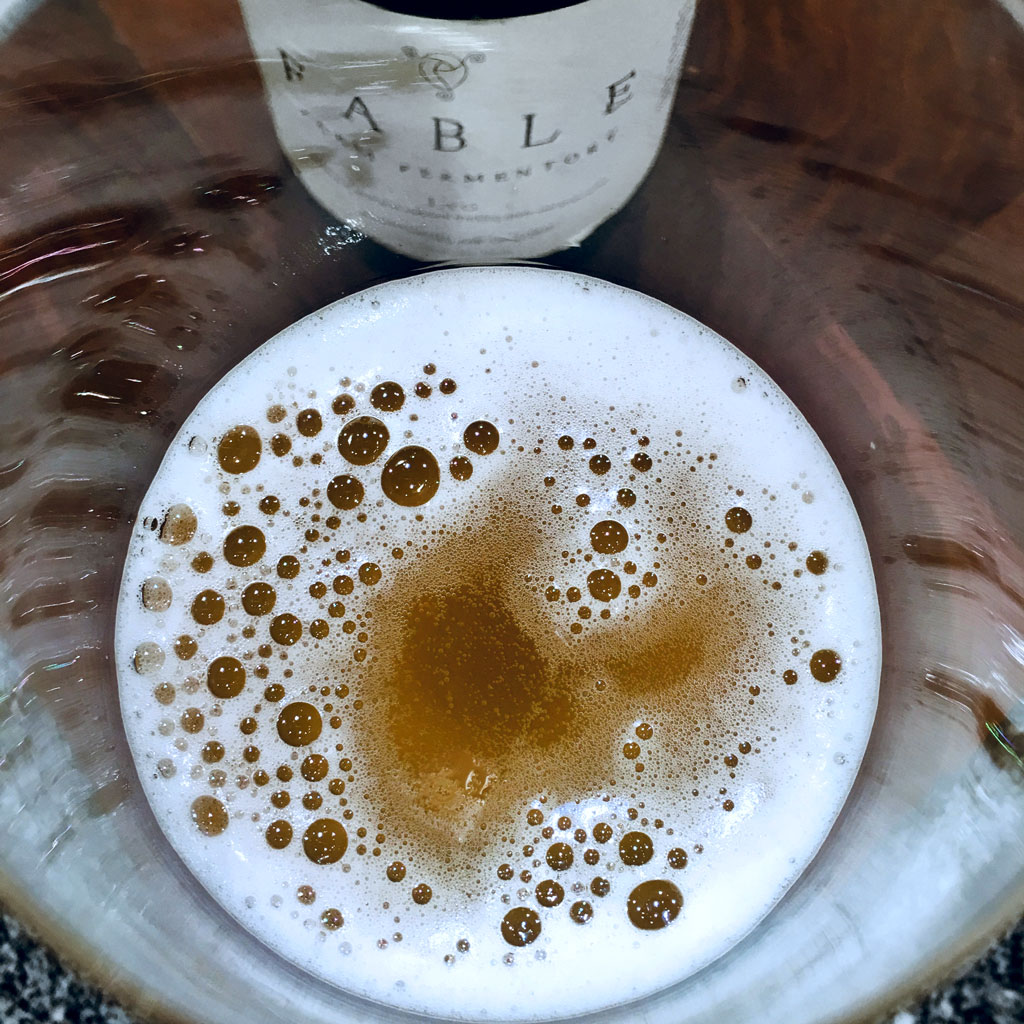 This cider blends the 2015 and 2016 harvests and is 60 percent cider apples and 40 percent La Crescent grapes, fermented dry and dosed with a tirage of maple syrup à la methode traditionelle. The result is a fully dry elixir with more fruit notes than the apple-only Fluxion III and Emanation, mingling La Crescent’s high, honey-blossom fragrance with grounded, bittersweet wild apple aromatics. The savory mousse is frothy and alive, fizzing into flavors of chestnut honey and russet apple skin (that’s the apple talking), with a reedy, lemon-acid blaze at the finish (that’s the grape). Stunning.
9.5% abv | $22 (750 ml.) | 115 cases made

Where to start? Over two harvests, 2015 and 2016, pomace from red winemaking — in 2015 from La Garagista and in 2016 from Fable Farm’s own cellar — was added to apple cider barrels for an extended soak. These four barrels of grape-influenced cider were blended with two standard cider barrels. This was bottled with a tirage of honey to kick-start the prise de mousse. The color is like pale cherry wood, and the fragrance mingles dried strawberry, rose petals, red apple skin, and lily of the valley with an utterly savory, cured meat aspect, like that smell when the Italian salumiere shaves you the thinnest, most delicate slice of Prosciutto. The palate, fully dry, delivers a frothy mousse that carries flavors, again, of strawberry, potpourri, and russet apple skin. The finish is bitter and sharp, with a lingering, rosy-sweet essence. A cider evocative of pink sunset in an orchard.
8.5% abv | $21 (750 ml.) | 125 cases made