Youmna and Tony Asseily are breathing new life into an historic Bordeaux vineyard. On the ninth of August, 2006, we stood here on the terrace without a clue in hell what to do with the vines.

Originally from Lebanon, the Asseilys had been living for years in London, where Tony was a merchant banker. But during the summer holidays they rented a cottage near Haux, in the Cadillac region of Bordeaux, and later took over the guest quarters at nearby Château Biac. As the pair angled toward retirement and with their children leaving home, they mulled their options. Go back to Beirut? Move to New York? Relocate to France, where they’d spent so many summers?

They decided to start house hunting in Bordeaux. “The original idea was absolutely not to have a vineyard,” Youmna told me, as I visited on a sweltering day last July. “We wanted a holiday house. Because my husband didn’t want to be the one waking up at three o’clock in the morning worrying about frost.”

But, “Each time we looked, Tony kept saying,

‘But Biac has a vineyard, and you don’t want a vineyard!’

“So we’d go back to square one and start again.” 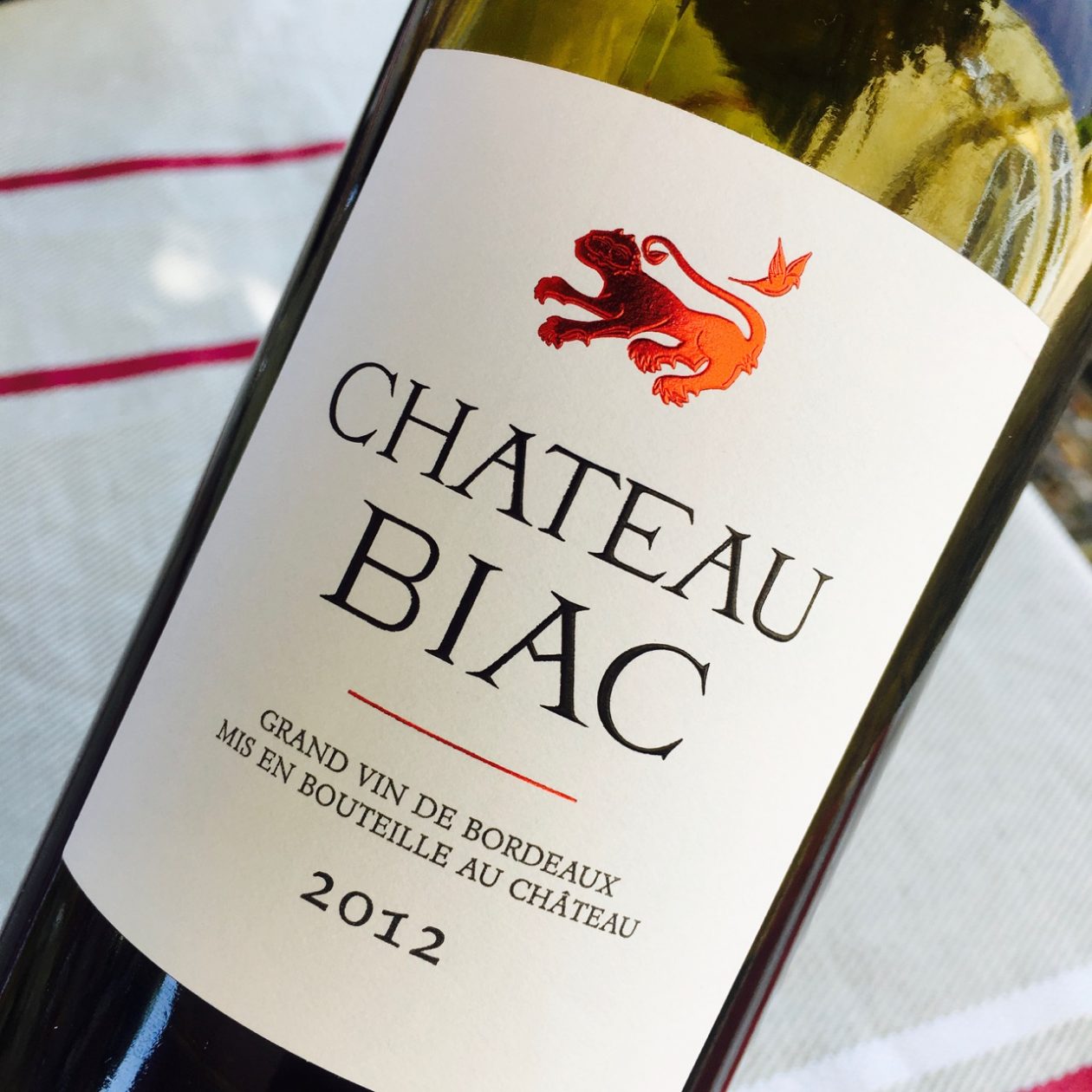 When their search proved fruitless, they decided to ask Biac’s current owners if they’d consider a long-term lease of the guesthouse. It seemed simple enough: The Asseilys would get Biac, the owners could keep the vines. The owners wanted to sell.

After a year of haggling, the two couples held a fateful final meeting. Youmna took Tony aside. “I said, ‘Listen, this is it. I want you to make the decision. Just think about it five minutes, then go inside, and whatever you decide, I’ll be behind you.’”

It happened to be Youmna’s birthday. Her present?

Youmna realized the move would change the family’s whole center of gravity. And there was the issue of property itself: crumbling infrastructure, faulty spacing, failing vines.

But Château Biac has a long history. Records from the 19th century show the estate produced wines of elegance and finesse. It had once been considered something of a premier cru of the old regional appellation, Langoiran (it’s now part of Cadillac Côtes de Bordeaux). And locals told them they were sitting on great terroir.

“I knew nothing about what a terroir was, what it meant or anything,” said Youmna. But after taking a short course at the Faculté d’Oenologie, in Bordeaux, “I understood why so many people kept telling us that it was absolutely perfect.”

“We started understanding that we could do something quite unique here that really had a personality, its own personality,” Youmna said. Maybe it could re-bloom.

The family embarked on a twelve-year vineyard restructuring plan, retaining Patrick Léon, a Bordeaux native who had begun as technical enologist for Rothschild and over decades earned a reputation as one of the world’s greatest consulting winemakers. He is now principally at Château d’Éclans, but had once considered buying Château Biac and was persuaded by the Asseilys’ project. Wildflowers on the Biac estate

Undaunted by the day’s 40°C heat, we ventured to a rise to take in the vineyard view. The site’s 9.5 hectares lie atop a curl of the Garonne River. The land here is shaped as a broad natural amphitheater tilted at the sun. It’s carpeted with a range of soils, vast swaths from clay to gravel across the hill, with silt and sand toward the riverbed. Upslope breezes serve as natural air conditioning, and this air drainage guards against frosts at critical spring flowering. The site is planted primarily to Merlot (some very old vine), plus Cabernet Sauvignon, Cabernet Franc, Petit Verdot, Sémillon, and Sauvignon Blanc.

“So,” I said, wincing at the day’s brilliance, “You didn’t want to buy a vineyard—and then you bought a big vineyard?”

“For us, enormous,” Youmna said. “And once we had bought it—and once we had been told how good it was—that was the carrot at the end of the stick. It was a time in our lives we could actually devote to the vineyard. If you wake up here, with the view, every day you’re on holiday. Because once the office is closed and we’ve finished our day’s work, I go to the pool.” 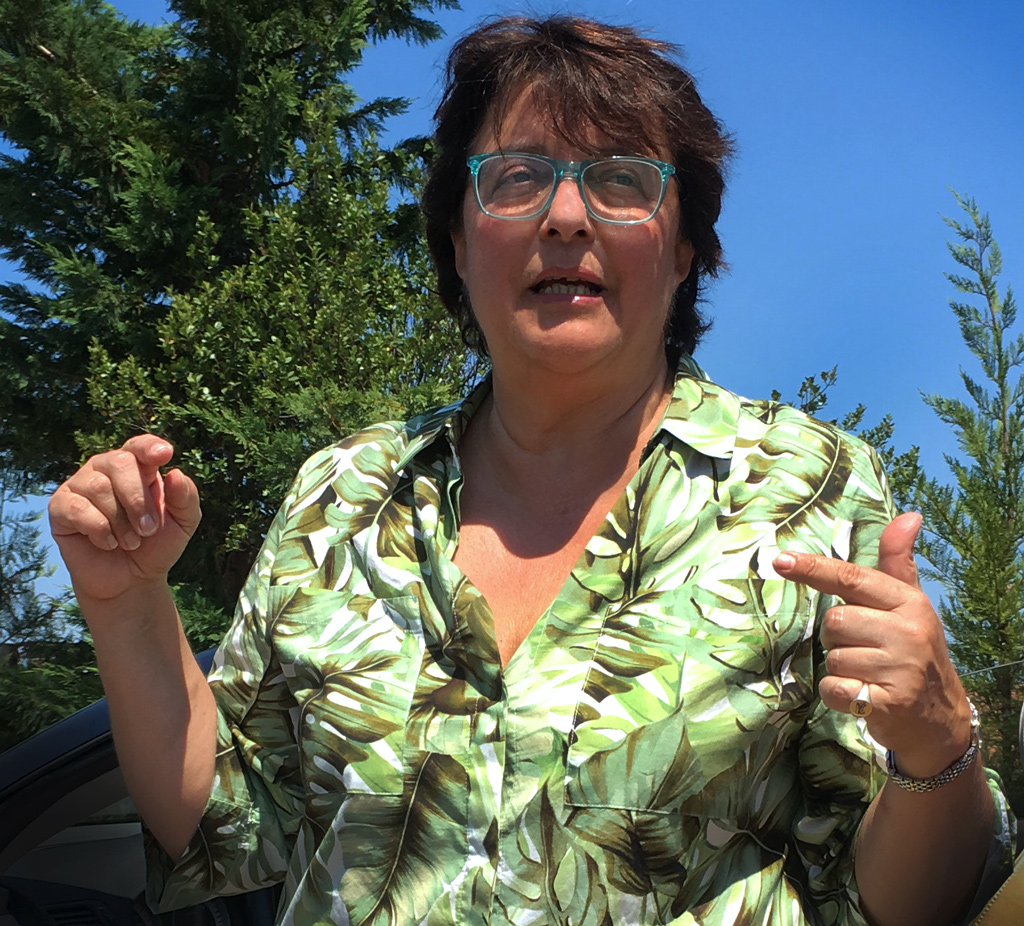 The vineyard restoration continues to be a work in progress (Youmna, a talented watercolor artist, has made these charming before and after drawings). “We’ve kept some old vines, and have replanted new vines,” she said, pointing to the older Merlot, the plot’s wizened elders, then newer areas planted to Petit Verdot and Sauvignon Blanc. “It’s a bit like in a family: You need grandparents for tolerance, patience, and wisdom, and you need young people for energy. It’s a nice example of how we make our wines here.”

It’s an apt metaphor for the business, too. After nearly a decade in the financial industry, Yasmina Asseily, the daughter of Youmna and Tony, has also joined the team, bringing a jolt of fresh energy to the sales and marketing.

“A lot of people ask us if we’re organic,” Youmna said, unprompted. “We have a practice of culture raisonnée, sustainable agriculture. My theory is that it’s exactly like looking after your own body. If you eat properly and exercise properly, and look after your health and sleep properly, you’re less likely to catch pneumonia. You might fall ill from time to time, but when you catch a cold you don’t take antibiotics, you take chicken soup and go to bed for 24 hours, and usually that does the trick. But if you catch pneumonia, you have to take an antibiotic.” We retreated from the fierce lens of sun to the canopy of an enormous linden tree. “Lunch is very easy. It’s all cold,” Youmna said—and all made fresh at home. There was charcuterie, a fish spread daubed onto savory pancakes, a salad of watermelon with feta and mint, cold roast beef with mustard, cold ocean trout with lemon hollandaise, and, for dessert, homemade strawberry ice cream with pêche au vin.

As we ate, we tasted the wines: first a white made only for on-premise consumption, and then two reds, both exported to the U.S. Château Biac’s wines are usually, but not always, Merlot-dominant. Blending is, after all, the fundament of Bordeaux’s praxis and poetics: to make a balanced wine regardless of what the vintage hands you.

Their 2012 flagship (about $50) is a plummy wine, fruity but amply structured. A breath of juniper and cedar drifts above, while its coffee-soaked midsection deepens the interest. The 2013 Cuvée Felix (about $25) is friendly and more nimble, but with the same breezy herbal profile. Both wines are zesty and, even on a sweltering day, cooling.

I asked Youmna about their aesthetics. What style of wine were they trying to pursue?

“People sometimes say, ‘How will we recognize you?’ because they are so used to a formula. And I say the link is there is always a balance between tannins and fruit and wood. They’re not too woody, they’re much fruitier. This is the identity of our wines: their freshness, and hopefully their elegance, and their—pleasurableness. I don’t know if it’s an English word or not, but I just made it up.”

Biac’s prior owners hadn’t marketed any wines since 2002, so by the time the Asseilys’ first releases came online in 2008, there had been no Château Biac in the market for six years. That allowed them a fresh start with the image, too. “We revisited the whole packaging,” Youmna said. “We wanted to have something that’s really true to the way we live, which is, as they say in French,

“—To live happily, let’s live under the radar. Low profile, out of the limelight,” she said. (The saying derives from a fable by 18th century French writer and poet Jean-Pierre Claris de Florian.)

The redesigned labels sport a stylized cat, Felix. It’s an ancient symbol dating to 4000 BCE, originally discovered in caves in Turkey. “These animals were symbols of power and strength. They were there to protect the symbols of fertility,” Youmna said. It’s a wild cat—not a lion, but fearsome, and part of the Asseily family crest. She wears a gold ring bearing its insignia. 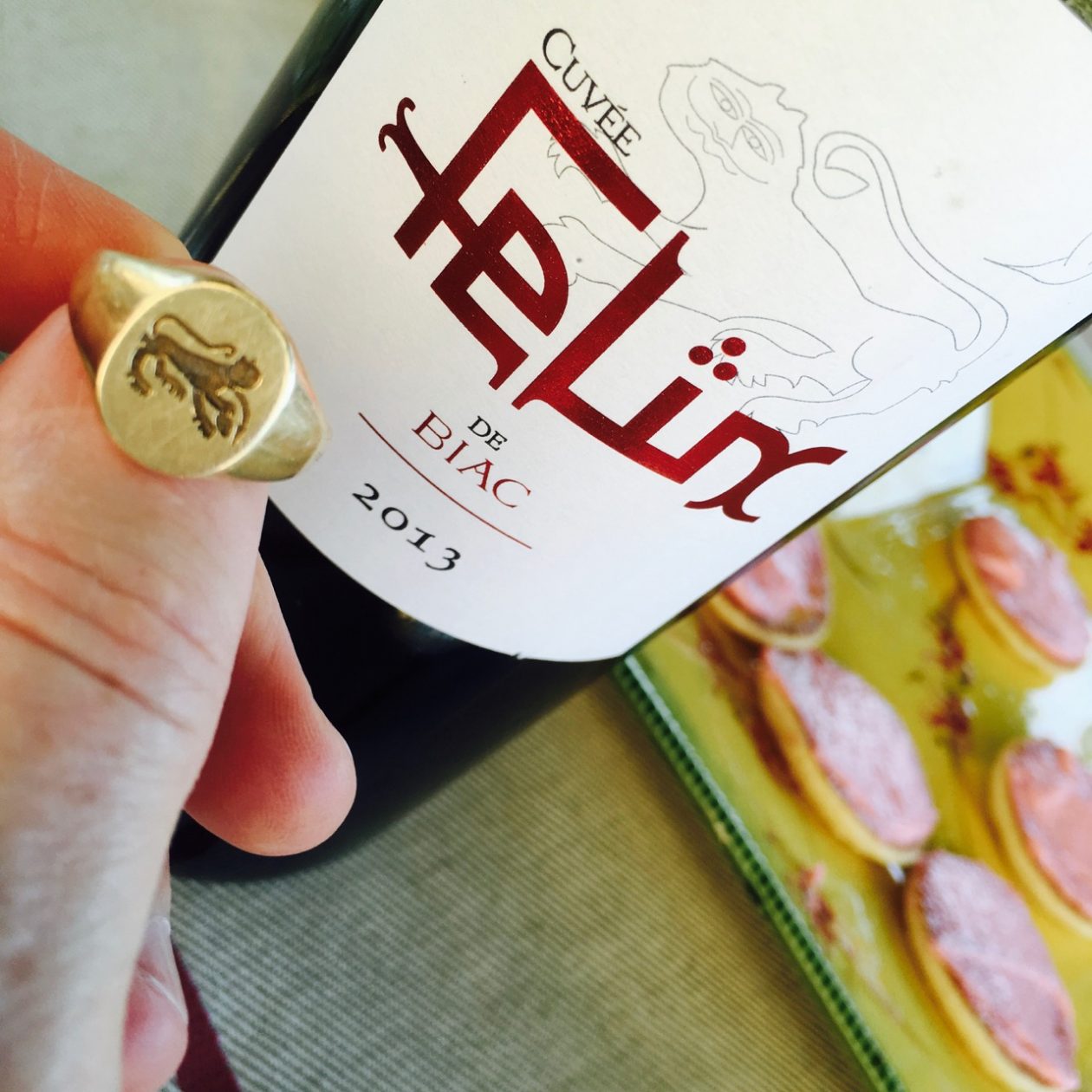 So while the new labels nod to the past, they feel modern and stylish, too. “Historical, yes, but let’s make it clean, clear,” she said of the goal. It’s a canny marketing strategy being adopted by many in Bordeaux.

“I don’t know if it’s savvy,” Youmna said. “It’s instinctive. Because we have another Arabic proverb,” she said, suddenly switching languages:

“I like the idea that a lie has you on a short rope,” I said, “because you can’t un-attach yourself. It’s always going to pull on you. It’s going to pull you around.”

“I always said if you pretend, especially nowadays, people will find out,” said Youmna. “So, you have to be what you are. And hopefully that’ll be good.”

Wines were samples tasted at the winery on 19 July 2016. Château Biac is imported into the U.S. by M.S. Walker. I’m grateful to the Union des Côtes de Bordeaux and Teuwen Communications for sponsoring my travel.