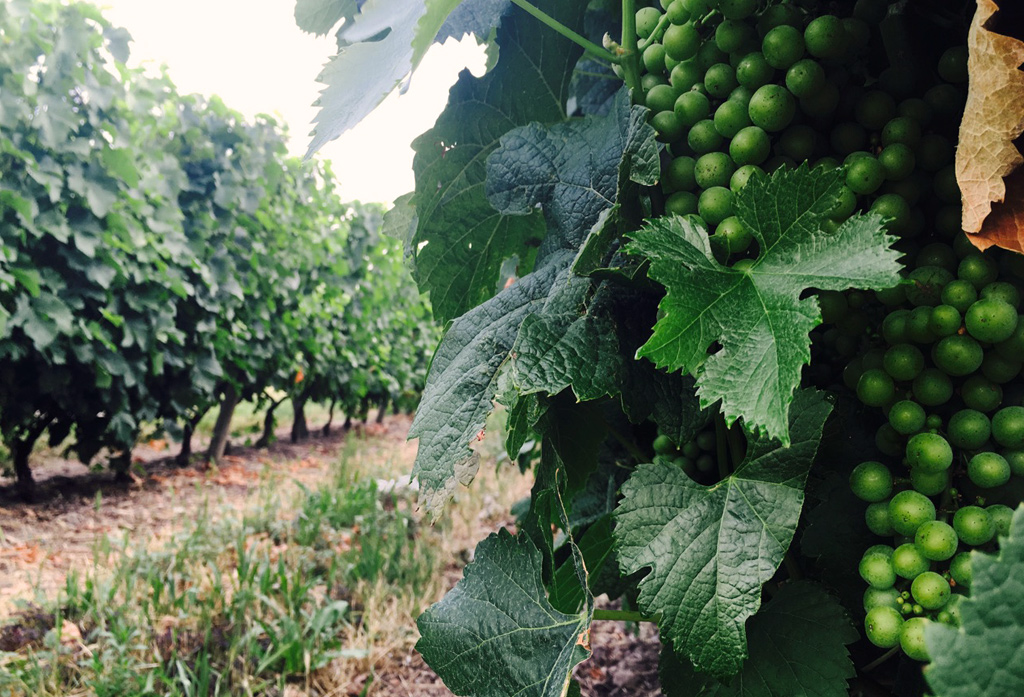 Château Haut Bertinerie, in Blaye Côtes de Bordeaux, deploys a lyre trellis system throughout its eighty hectares of vines. It’s an unusual approach in Bordeaux, where Guyot and double Guyot training are the norm, but it’s one with distinct advantages.

In Bertinerie’s vineyard, rows of Sauvignon Blanc, Merlot, Cabernet Sauvignon, and Cabernet Franc are widely spaced, separated by broad avenues of grass. But within the rows, vines are tightly planted and trained into a Y-shaped trunk, each cordon trellised to one arm of the splayed lyre system.

The approach generates twice as much foliage per vine, which cranks up the solar power to boost sugar levels and yields. This makes lyre trellising a good choice for low-fertility soils; the winery credits the system for adding fatness especially to its Sauvignon Blanc.

Plus, Bordeaux is damp—as these murky mid-day pictures show—and this bilateral trellising allows air to circulate within the canopy. The effect is a boon especially during early summer months, when rains pump up disease pressure.

More air circulation also means less chance of mildew throughout the season, which in turn limits the treatments necessary to control vineyard maladies. That makes the lyre trellis good for the environment, too—and for the viticulturist’s bottom line.

2014 Château Haut Bertinerie Grand Vin Blaye Côtes de Bordeaux
Dense, chewy fruits finish with a kick of pepper. It had been in bottle merely three weeks when I tasted it; give it three to five years to settle down.
60% Merlot, 40% Cabernet Sauvignon

All wines were media samples tasted at the winery on 20 July 2016. The Union des Côtes de Bordeaux sponsored my travel.

Written By
Meg Maker
More from Meg Maker
This award-winning publication gets a fresh name, plus an expanded scope and...
Read More