Or Tocai Friulano. Or Ribolla Gialla.

That’s what Dan Petroski would say, anyway. Since 2009 he’s been working with these grapes to fashion delicate, floral white wines in the heart of California red wine country.

He named his wine label Massican after the mountain in Campania, Italy, where his great-grandfather was born. But if Massican’s roots are anchored in southern Italy, its crown reaches northeast, toward Friuli-Venezia Giulia and the grapes native to that region. International grapes Sauvignon Blanc and Chardonnay complete the fraternity. (It is Napa Valley, after all.)

It all sounds a tad unorthodox, but it seems to be working. In 2011—after two tiny vintages—Petroski was named a “Winemaker to Watch” by the San Francisco Chronicle. In 2013 his wines were poured at a tasting celebrating underdog grapes, The Seven Percent Solution, now regarded as a watershed moment for California makers who value vinous diversity. His wines have since become a fixture of critics’ Top N lists.

But if his success is a straight arrow, his story is not. Petroski grew up in Brooklyn (not Italy), and studied history as an undergraduate at Columbia University. After nine years in publishing at Time, Inc., he went to business school at NYU, graduating in 2004.

Then a post-grad-school vacation to Italy to blow off steam left him smitten with the landscape and culture. Within a year, Italy had called him back. He jettisoned his publishing track and moved to Catania, Sicily, embedding at Valle dell’Acate winery. For a year he worked with native white grapes Insolia and Zagra, and red grapes Frappato and Nero d’Avola. He also traveled extensively, soaking Italy deeper into his soul.

When Petroski returned stateside, he cast about for a job in East Coast wine sales, but the weak economy kicked him westward, and he took a position as a cellar hand at Larkmead in Napa Valley—a storied red wine house. That was 2006, and by 2009 his talent had catapulted him into the role of winemaker.

While he was staining his arms up to the elbows with Cabernet Sauvignon, Petroski continued to be haunted by the elegant whites of the Mediterranean. He decided to launch his own small effort focusing exclusively on white grapes.

It wasn’t driven exclusively by idle romanticism. “I started the Massican as a business plan,” he told me, when we met for a tasting at Redd Wood in Yountville, Calif. “I’d spent ten years in corporate America. It was drilled into my being that we needed to exceed targets to be viable. So when thinking about starting a wine brand, it was important to have achievable and surpassable goals”—plus slow, steady growth. From that first release of four hundred cases, he’s on track to produce four thousand by 2019.

“For business, we always want to be one step behind the demand,” Petroski continued, angling toward the crux where his business philosophy meets his aesthetics. “For wine (and the vine), I always want to capture the essence of its lifecycle just before it hits maturity. With this philosophy I feel that there is still energy in the development process, which translates to energy on the palate.”

That energy—that spirit—is engendered in part by the tension between primary and secondary fermentation, he explained. “Yeast fermentation is explosive. It pushes CO2 out.” Meanwhile, “Malolactic is internal. It happens inside.” The result is a kind of dynamism that builds and holds interest.

As we talked, the late afternoon sun streamed across our table, washing us in pale light and making the wines seem even more luminous. Tasting these recent releases, it seemed clear that the eclectic mix of grapes is an essential component of the wines’ spirit, too. An element of tension arises from the commingling of these different varieties, with their various notes of fruits and flowers (green and yellow), salt and nuts and straw. Most of the 2014s in our tasting were also incredibly youthful and spritely, animated by the frisson of these elements sorting themselves out. I’d like to return to the wines in three years to see how those conversations resolve.

His wines aren’t really designed for long aging, Petroski said, but he concurred that time is a critical element. “It is important to me to allow the wines to achieve their final destination in bottle,” he said. “I love the wines upon release, but to revisit them six and twelve months later is such a joy.” 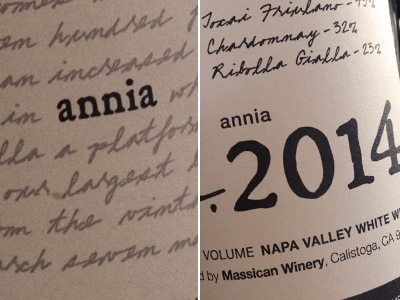 2014 Massican White Wine “Annia” Napa Valley
A blend of Friulano, Chardonnay, and Ribolla Gialla. The wine feels like white flowers carved from minerals, draped in a garland of laurel and jasmine. It’s salty on the palate, with pear and pear skin, plus a rustic shock of white pepper smoothed by beeswax and sage. The finish is decadent, like old apple skin.
12.2% abv 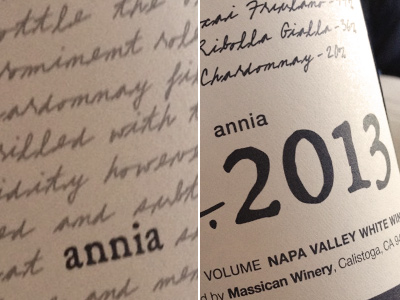 2013 Massican White Wine “Annia” Napa Valley
The blend is similar to the 2014 vintage, with slightly less Ribolla Gialla. It’s quite a different wine, a little spritzy and more yellow-citrusy, with a body ripe with pear, yellow apples, and laurel. There are minerals but it’s less crunchy, more about silken fruit and sunlight. An exceptionally good pairing with Pecorino cheese.
12.5% abv 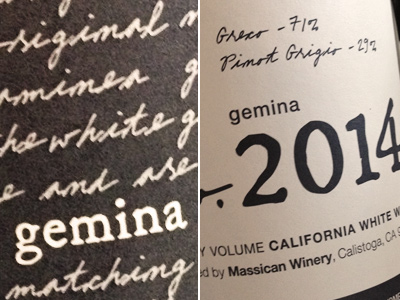 2014 Massican White Wine “Gemina” California
A blend of 71 percent Greco di Tufo and 29 percent Pinot Grigio, it’s herbaceous and stony, with a shock of lemon peel, flesh like a grapefruit, and a finish that’s spicy like a Clementine. It’s high-acid and attenuated; Petroski suggested holding it a bit longer.
13.3% abv 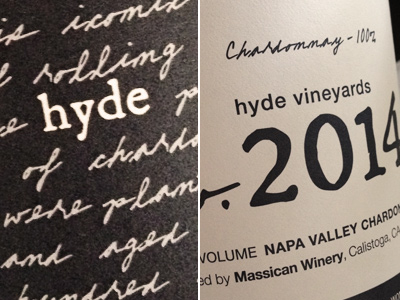 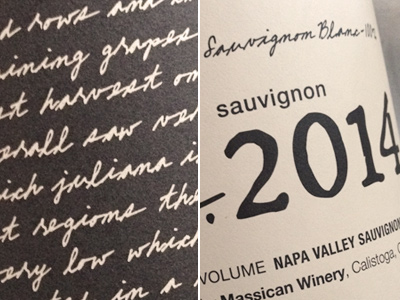 2014 Massican Sauvignon Blanc “Sauvignon” Napa Valley
An ample but piquant Sauvignon Blanc, with limey musk, white flowers, jasmine in broad sunlight, screaming acid. It has a pizzicante quality on back of the tongue that made it absolutely stunning with Baley Hazen Blue cheese, the acid and moldy funk working seamless together; the cheese echoing that back-palate sharpness and pungency.
13.9% abv 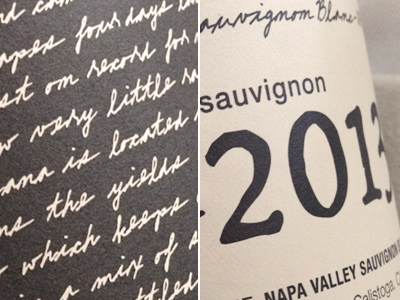 2013 Massican Sauvignon Blanc “Sauvignon” Napa Valley
The 2013 vintage of this wine has mellowed into sweet yellow apple, dried apricots, fresh green citrus. It’s tingly but not as exercised as the 2014. Think quiet and twinkly versus blazing star. And you can skip the cheese.
14.1% abv