Over 1,200 years of viticulture inform the Rieslings grown at Schloss Johannisberg. This learning is embodied in three beautiful wines from the 2013 vintage. 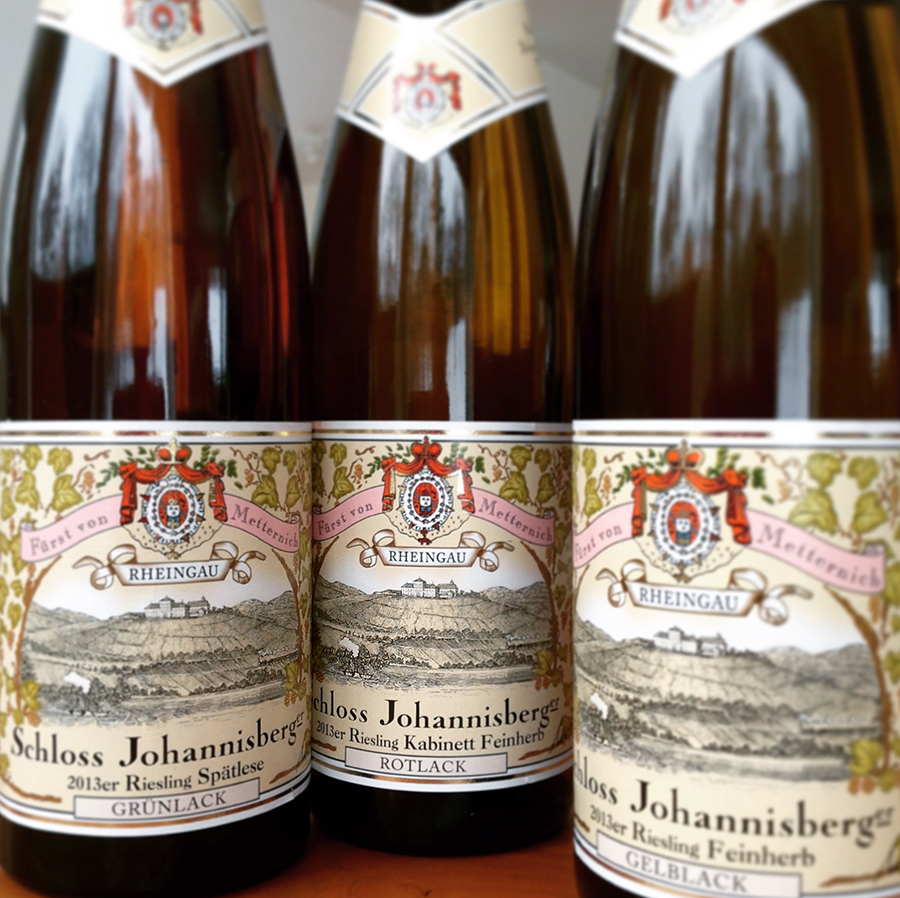 In the twelfth century, Benedictine monks built a monastery outside of Wiesbaden on a hilltop with a sweeping view of the Rhine. The area had been in vine since at least 817, and the monks deemed it a propitious place to build their basilica and the vineyards that would support them. They named their church in honor of St. John the Baptist, and in 1130, the hill, monastery, and nearby village were renamed Johannisberg, “John’s Mountain.”

Viticulture expanded in the eighteenth century when the estate came under ownership of Konstantin von Buttlar, Prince-Abbot of the Fulda district. Von Buttlar constructed a palace—that’s the “Schloss” part of Schloss Johannisberg—and revitalized the vineyards with a focus on Riesling vines, which thrived in the gravely quartzite and loam-loess soils.

In 1776 a clerical error—a delay in filing essential paperwork—led to a harvest two weeks late. By then many of the grapes had become infected by botrytis, or noble rot, and the estate gave the fruit away to neighboring villagers to make wine for their own larders. To everyone’s astonishment, the resulting wine was marvelous, and Germany’s Auslese, Beerenauslese, and Trockenbeerenauslese wines were born. (The Hungarians were already onto this happy rot, having produced Tokaji possibly as early as the late sixteenth century).

The Baroque palace of Schloss Johannisberg was variously owned throughout the Napoleonic wars, then destroyed by bombs during WWII. But by the 1960s, the estate had been restored (see images here) and today remains family owned. There are 86 acres of vineyard, all Riesling. Indeed, Riesling has became so closely associated with the estate that “Johannisberg Riesling” was until recently used by many, including Ernest & Julio Gallo, to assure consumers of the legitimacy, if not the provenance, of their Riesling.

The estate has traditionally used colored seals to indicate the wine’s ripeness classification: Gelblack or “yellow seal” for Qalitätswein, Rotlack (red) for Kabinett, and Grünlack (green) for Spätlese. You’ll find notes on these three below.

These are serious, nuanced wines, wines of restraint and significance. But their stony minerality is lightened by golden-hued fruits and and shimmering flowers, and the sweetness of the riper Prädikat designations is yet another countervailing levity. They’re serious but not austere, and, like the view from their hill, quite beautiful.

2013 Schloss Johannisberg Riesling Feinherb Gelblack Rheingau
12% abv | $32 (sample)
A floral perfume of jasmine and green tea is anchored by notes of ginger, white peach, and Meyer lemon. Just off-dry, the body has a soft, pliant texture and crackly mid-palate minerality that keeps things serious. The acid hits you at the end as a starburst of ginger lemonade.

2013 Schloss Johannisberg Riesling Kabinett Feinherb Rotlack Rheingau
11% abv | $55 (sample)
Powdery white flowers and a whiff of field herbs complement aromas of faint pineapple and wet stone. Supple and very serious on the palate, off-dry but temperately so, with modest acidity and quiet yellow fruits. This wine feels like a rain shower on dusty pavement after a long, dry season.

2013 Schloss Johannisberg Riesling Spätlese Grünlack Rheingau
7% abv | $37 (sample)
A wine with the scent of spring blossoms—tulip, daffodil, and chive—and flavors of guava and ripe white peach. Sweet but not syrupy, with luscious acidity that offsets its tropical ripeness. It’s slightly reductive at first (hence the chive), so give it ten minutes of air. Exquisite with salty cheeses; a wine of exceptionally fine details and filigree.

Many thanks to Wine Business Monthly for recommending this article to their readers.
Follow my wine reviews on Vivino and Delectable.