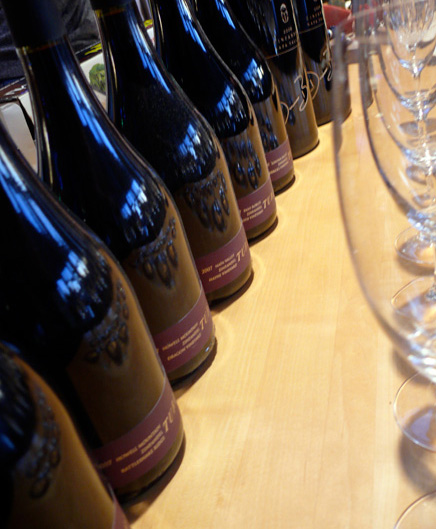 Friends of ours, a couple who live nearby, belong to Turley's wine club. This is a rare privilege; Turley has a waiting list to get onto the mailing list to secure an option to buy their Zins. But our friends are in, and have been for a while, receiving two cases a year. The trouble is, they can't drink it all, and their new order ships soon. Desperate times call for desperate measures: it was time for a Turley dinner.

There were twelve of us. We started the evening with a single bottle of Scholium—a curiosity the hostess wanted to try—then progressed to Rieslings and a few games of billiards. I had never played billiards, and wasn't sure I could even hit the cue ball itself, let alone smack it into another ball, sending that one, striped or solid, into corner pocket, side pocket, whatever. Fortunately somebody decided I should be the one to shepherd the wines, so I busied myself with capsules and corkscrews, filling the players' glasses and topping them off when they ran dry. 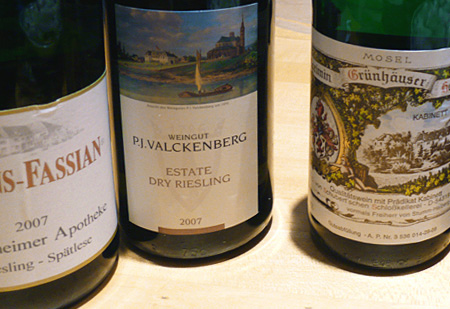 There were four Reislings, all 2007s ranging from $12 to about $26: P. J. Valckenberg Estate Dry Riesling, Johannishof Johannisberg Reingau Kabinett, Maximin Grünhäuser Herrenberg Kabinett, and Grans-Fassians Trittenheimer Apotheke Spätlese. (Yes, these wines are a mouthful in more than one sense.)

The Valckenberg was quite dry and slightly frizzante, while the others were off-dry. The Johannishof and Grünhäuser were both a bit cloying, in truth, but the Grans-Fassians offered a very clear, floral nose and nice acid. This was my favorite of the four, but all of them paired nicely with the pork springrolls and hoisin sauce our hosts passed as appetizers.

I did, eventually, cue up, when the last game on the table needed a fourth. As anticipated, I was terrible. But Riesling and billiards is a winning combination. There's enough alcohol in the wine to lower your inhibitions—who cares if you just sunk your cue ball?—but not enough to ruin your aim, whatever there was to begin with. 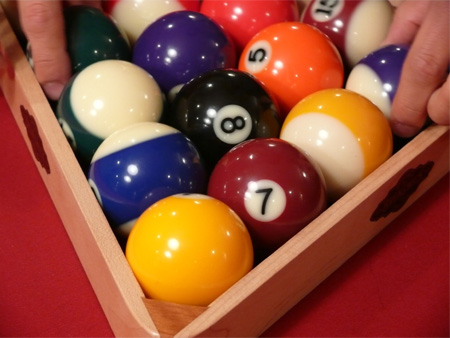 It was time for dinner. We started with a roasted pepper soup spiced with chipotle and dressed with fresh crab and a little crème fraîche. Our hosts poured the first Turleys, from Ueberroth and Frederick's Vineyards. Both wines were savory and smoky, with a funky, earthy chewiness. The Ueberroth leaned a little more toward fruit, while the Frederick's leaned toward earth—steelier and a little bit sulfurous. But the heat and heft of both were an easy match for the pepper and chipotle—a difficult pairing for nearly any wine.

And then came the main course. Our host had been up late the night before braising beef shortribs in Cabernet, flaming-off five bottles of the stuff to make a sauce so dark and concentrated it was almost chocolatey. The meat was tender and succulent, the dish a perfect foil for Turley's concentrated style. Soon we were opening two more bottles—from Rattlesnake Ridge and Moore "Earthquake" Vineyards—wines that were, unbelievably, even more powerful than the first, hugely extracted and eye-crossingly alcoholic. The Earthquake drank like earth itself, very savory, slightly vegetal, dark like soil and strong like a mountain.

We finished with carrot cake, delighted by a sweet ending and a dessert that could sop the wine in our stomachs. Our hosts had been enormously generous, lavishing us with beautiful wine and food and acting as if it was we who were were doing them a favor, helping them work through their Turley share. We went home sated and happy, and glad to live only four miles away.