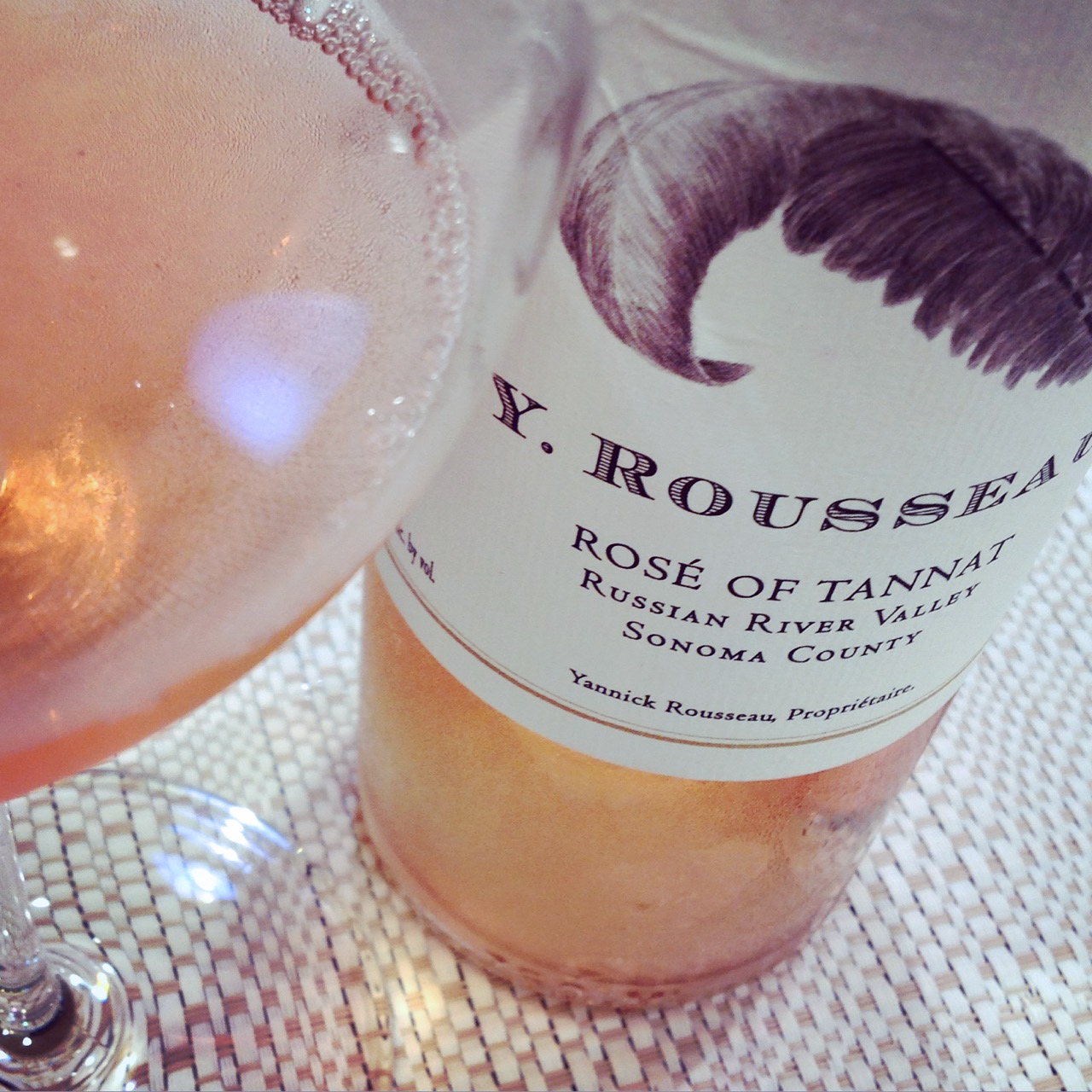 A short while ago I wondered aloud (well, online) whether anyone in California was turning Colombard into a premium wine. The grape has been grown for centuries in Gascony and the Sud-Ouest of France, and while it finds its way mostly into Cognac, it’s also allowed in white Bordeaux. In the U.S. it has a sorry history as a nondescript varietal wine, or as a blending grape used to sharpen flabby supermarket plonk. But its parentage (Gouais Blanc and Chenin) and long French history suggest it might shine with better treatment.

Yannick Rousseau responded to my inquiry with a sample of his Colombard, plus five other wines from his lineup. Rousseau originally hails from Gascony and produced his first Colombard there in 1996. Since 1999 he’s been making wine in California, first for other brands and, since the 2008 vintage, under his own label, Y. Rousseau.

His wines, including Colombard, Tannats from the Russian River Valley and Mendocino, and Chardonnay and Cabernet Sauvignon from Napa, have won praise from other wine reviewers, and his house was just named one of Wine & Spirits’ 2015 Top 100 Wineries. To me his wines seem to mingle California sunshine with Old World sensibility, striking an admirable balance between ripeness and restraint. Their terrific acidity and texture also make them great dining companions.

After tasting (see my notes below), I interviewed Yannick about his winemaking approach and his mission to spread the spirit of Gascony to California—and beyond.

Q: You made wine in your native Gascony before coming to America. When did you leave France, and more importantly, why?

I graduated from the enology program at the Université Paul Sabatier in Toulouse in 1997. As a young winemaker I wanted to travel the world, explore New World wine regions, and improve my English. I first came to Napa Valley in 1999. My plan was not to stay in Napa Valley—but I have been in Napa Valley for 16 years now. I was hired by Newton Vineyard in Napa in 1999 as assistant winemaker under Luc Morlet, and Michel Rolland was the consultant. Then I was winemaker at Chateau Potelle up on Mount Veeder from 2001 to 2007. They sold to a big company in 2007; that’s when my wife and I decided to start our winery.

By the way, my wife, Susan, is Texan, although she has spent her last 25 years in California. She is also one of the reasons I’m still in Napa Valley!

Q: Why have you chosen to work with native Gascony grapes here in California?

Believe me, I’m very attached to my home region and my French family. So having the opportunity to bring the Colombard and Tannat into my portfolio and lineup of wines was a way for me to pay tribute to my roots, my heritage—and bring a slice of my home to California.

Q: What are the differences in working with Tannat in France and in California? How are the vines and wines the same, and how are they different?

A lot of Tannats from Madiran and Irouleguy have a bit more rusticity to them. The California Tannats are more generous, with bright red and black fruit. My Russian River Tannat and Alder Springs Vineyard Tannat tend to be juicier and maybe even denser than the French Tannat, mostly because we have more sun in California. That said, as far as the texture and structure of the wine, they have the same frame. You can take the Tannat out Gascony, but you can’t take the tannins out of the Tannat.

Q: Same question, but with Colombard. What are the technical differences working with this grape in France and California?

For the Colombard, I use the same winemaking techniques we use in Gascony: skin contact maceration, cold stabilization, and fermentation at cold temperature.

What is a bit different is that I like to keep my Russian River Valley Colombard on the lees for four to five months to bring a little bit of mid-mouth feel. Again, we have more sun in California than we do in Gascony, so my Colombard is a bit richer. However, because the vines are now 42 years old—and getting older every year—we have an amazing minerality and savory character.

Q: Do you think Colombard has the potential to take hold here as a fine wine?

California Colombard suffers from a bad reputation it acquired in the 1970s, when big wineries like Gallo made jug wine from Colombard because they could farm it at very high yield (12 to 14 tons per acre) and get big clusters and huge berries. For Colombard to be viewed as a fine wine, I think I would have to make another version to it from the same vineyard but with a little bit of malolactic fermentation and barrel aging (but no new oak).

Q: Tell us about the differences between the Saralee’s Vineyard and Alder Springs Vineyard Tannat.

There are quite a few differences. Saralee’s is on the valley floor in Russian River. It’s planted with an American clone developed by UC Davis. For Saralee’s, I use 30 percent new French oak.

I have very specific goals with each Tannat: The Saralee’s is the Tannat to introduce consumers to Tannat. It has more bright fruit, is juicier and not as structured as the ASV.

With the ASV Tannat, my goal is to compete with the best Tannat in the world. I believe it has more potential to reach that goal because it’s high elevation, denser and more structured.

My mission is to put Tannat on the map in the U.S.!

As far as my winemaking philosophy and approach, it is important for me to remind every consumer and trade wine buyer that even if I am a French winemaker, I don’t try to make “French wines” in Napa and Sonoma. However, when I make wine, I apply my French winemaking background and approach.

A simple example is that I don’t pick my grapes over-ripe; I don’t want my grapes and my wines to taste jammy and plummy and to be heavy. I look for a balance between richness, density, good acid, and a nice tannic frame, because I believe these are the wines that work better with food. I want my wines to have a sense of place, so that is why I have to be respectful with the grapes and humble with the wines.

The wine is the boss.

2014 Y. Rousseau Colombard Old Vines Russian River Valley, Sonoma County
Rousseau’s Colombard derives from 42-year-old dry-farmed vines in the Russian River Valley. It’s crisp and crackly up front, with green apple tartness and a lime citrus snap. But the texture is a surprise—round and luscious, a silky mouthful of melon and honeydew—and the wine’s lingering goodbye is minerally, almost salty, with a finishing flare of green acid. Delicious, and a superlative deal. 12.5% abv | $20

2012 Y. Rousseau Chardonnay Milady Mt. Veeder, Napa Valley
Imagine a lawn party in raking, late afternoon light. People in white linen mill about, or lounge on wicker, burbling with laughter, nibbling sandwiches, cutting deep wedges of cheese, and trying not to stain their fingers in platters of ripe berries. There’s the pok! of croquet beyond the hedge and chattering birds; later, the crickets begin. And there is this wine. It is sunlight distilled into a glass, its breath is like the kiss of that day’s breeze, its body crystalline and pure. People sip, then stop and look up. What is this wine? Some say Chablis, from a ripe vintage, or maybe a Montrachet made with restraint. It is succulent, gleaming, yet discreet. It is nearly perfect, they say, an ur-wine. It is just right for this moment—it is this moment. And it is beautifully done. 14.2% abv | $42

2014 Y. Rousseau Rosé of Tannat Saralee’s Vineyard Russian River Valley, Sonoma County
A lovely deep salmon color with a woodsy, tropical fragrance, as if the northern forest had been relocated to the equator: cypress and fir, mango and guava, tea and pine and fresh air. The palate is savory and herb-steeped, a tonic that mingles dark red fruits with crisp refreshment. The fruit was 75 percent direct pressed and 25 percent saignée, fermented in stainless barrels then aged five months sur lie without bâtonnage. The result is a concentrated rosé, lusty and big-hearted, but a wine that also manages gravitas and elegance. 13.5% abv | $24

2012 Y. Rousseau Tannat Saralee’s Vineyard Russian River Valley, Sonoma County
The color is sabled, like red ink, but the nose is fresh, as if crushed cherries and blueberries had been steeped in green tea. It’s spicy and ample on the tongue, with round red fruits tinged with spice and leather. It’s 89 percent Tannat, with a balance of Merlot and Cabernet Sauvignon and just a soupçon of Syrah. It’s youthful now, energizing and tonic; give it a few years. 13.9% abv | $35

2012 Y. Rousseau Tannat The Musketeer, Alder Springs Vineyard Mendocino County
The wine begs for air, then once it opens offers an expansive fragrance of ripe fruits tinged with mint: black plums, red plums, cranberries, wintergreen, cypress. The body is juicy, with cut-crystal acidity and notes of pomegranate and tea. Woodsy tannins and a kind of pure, mountain-forest earthiness ground the wine and add dimension, and it finishes with a grit of powdery, iron-stained minerals. Far too young now, but it has a structure that suggests great aging potential. 14.2% abv | $65

2012 Y. Rousseau Cabernet Sauvignon Le Roi Soleil Mt. Veeder, Napa Valley
A lush, shimmering Cabernet Sauvignon, beautifully crafted, with elements in place for good aging: fruit, acid, tannic backbone. This vintage reposed for 18 months in 75 percent new French oak, which polished it to a luster, but its finishing salute of acid and a graphitic mineral grip give the wine interestingness and allure. The fruit is opulent, with ample brambly berries and tender red cherries; yes, it was grown at 1,500 feet, but the 2012 vintage was ripe. Rousseau says the wine should reach its peak in five to six years and stay on that peak for possibly ten. Lay it down for three years, minimum, then see what it has become. 14.5% abv | $80

Many thanks to Wine Business Monthly, Terroirist, and New York Times wine critic Eric Asimov for recommending this article to their readers and followers.