Kieran Robinson's 2009 Syrah is a vibrant, handsome wine, a European-style Syrah with California sentiments. Here, an interview with tasting notes. 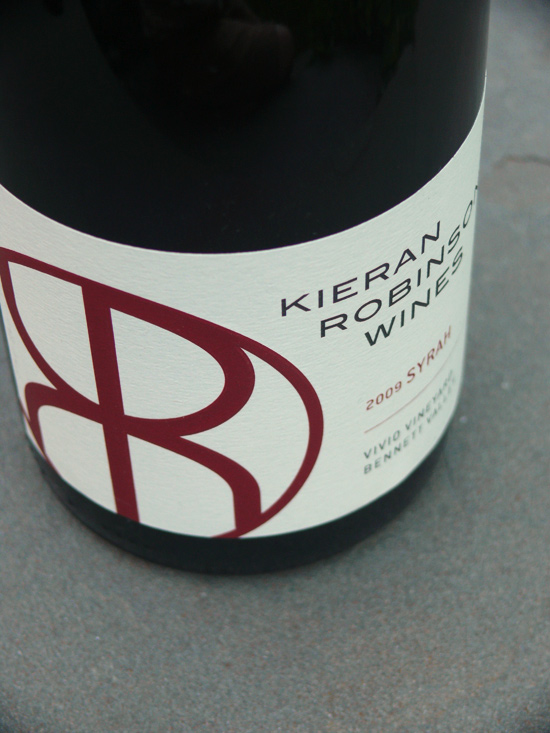 Kieran Robinson has a day job as assistant winemaker at Jericho Canyon Vineyard in Calistoga, California. I haven’t tasted Jericho Canyon’s wine, but I can say unequivocally that the company is lucky to have him.

Robinson first learned winemaking in upstate New York and the Pennsylvania countryside. But he soon found his way to the Northern Rhône, working harvest through pruning with Pierre Gaillard in Côte-Rôtie. The sojourn provided him a deep instruction in French viticulture’s praxis and poetics: attentiveness to site, deference to native fermentations, contempt for elaborate tinkering, and that peculiarly continental brand of luminous yet earthy naturalism.

When Robinson returned to the States in the spring of 2006, he headed straight to California, first deepening his experience at Cakebread Cellars before working under the tutelage of Paul Hobbs. Four years ago, with his wife Kristie Sheppard Robinson, he formed Kieran Robinson Wines. Two-thousand and nine was his inaugural vintage, a Syrah. Only a few hundred cases were produced.

I have tasted this wine, and it’s stunning. It’s a European-style Syrah with Californian sentiments, and among the most admirable Syrah from anywhere.

My tasting notes follow at the end of the story. First, a brief interview with the winemaker:

Your wine is evocative of French Syrah. Tell me about your time in the Northern Rhône.

When I arrived in France I’d only had experience making wine on the East Coast. In the Rhône it was a shock to see how tuned-into their vineyards they are, and how dependent they are on tasting. Making a balanced wine was all about tasting and using one’s palate—not chemistry.

We held a tasting with 75 different bottles from one vintage, all blind: Côte-Rôtie, some St. Joseph, some Condrieu. Those guys could pick out 70 of the 75 different blocks. They could even pick out their friends’ blocks! That was just a jaw-dropping moment for me. Like, all this talk of terroir is for real.

How did that influence your winemaking style?

In the Rhône they do a lot of whole-cluster, with native ferments for primary and malolactic. It’s cliché but it’s about just not screwing up and letting the wine do the work.

Say a little about Vivio Vineyard and Bennett Valley.

Bennett Valley was a great blend of cool climate with a touch of that California warmth. You wouldn’t think it would be cool-climate, but the marine layer leaps through the Petaluma Gap, hits Sonoma Mountain, and the place bowls up with fog. It’s the first part of the valley to get hit. The vineyard is a late pick—very, very slow ripening. Last year we picked October 28.

The vineyard owner wants the utmost quality—whatever’s needed. At this time of year I’m not there too much. I’ll wait for set and see how big or small the crop is, and whether we’ll have to drop fruit later on. But starting in September I’ll be there almost weekly.

When will you release your next vintage?

The 2010 is bottled and I’m just waiting for the TTB to approve the label. It’s a smaller vintage—180 cases. I’m hoping for an August release to try to get onto people’s menus for fall.

In 2012 I also made about 100 cases of Viognier from Jemrose Vineyard in Bennett Valley. I de-stemmed and put it back into the picking bins, covered it in dry ice, and did a 72-hour cold skin-contact maceration before I pressed to get all of those really good esters on the outside of the skin. It’s a native fermentation, and it’s still going through malolactic in barrel now—starting to move, building some steam. I’m hoping to release late August, but it might be January.

January’s maybe a tough time to release a white?

How can people find your wine?

My wife Christie and I do most of the sales here in the Bay Area. We both have full time jobs, but we try to find time to go into a restaurant after work, sit down, have a beer, and hopefully get someone’s attention to taste my wine.

I’m from Philly, so the wine’s in some restaurants there, and Pennsylvania distributes it. It’s a shame the stigma Syrah gets in this country. Everyone tells me, “We like the wines, but we just can’t take another Syrah.”

I’d love to be able to make a bit more, get to a 750- to 1,000-case production level. And maybe a tasting room in Sonoma, where I could sell direct to consumers and get my name out there, just by people walking in my door and tasting my wines.

Inky black cherry in the glass, the wine is redolent of bramble fruits and sweet sage. After a minute, these aromas lift open to notes of green olive, black olive, rare meat, and bacon. High above, there’s a gauzy haze of sweet garrigue and smoked earth. The wine glosses the palate with gorgeous acidity, and its finely articulated tannins mingle with flavors of anise and black earth and more rare meat. There’s fruit here, too, but fruit feels far from the point. The finish is smooth and lingering.

Many thanks to Wine Business and Wine Industry Insight for recommending this article to readers.

Written By
Meg Maker
More from Meg Maker
Wines of the Week, a study in acid: From Ridge, Wente, Matua,...
Read More