How do you remember a place, once you have returned home? 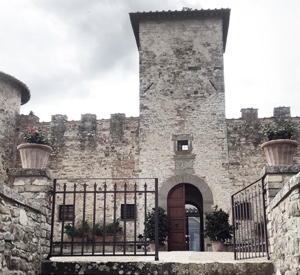 Editor’s note: As 2014 drew to a close, I reflected on my favorite wines of the year. First read my introduction (which also contains the list of wines), then follow along as I publish notes on ten wines that taught me something new. Here’s Number Eight:

I was a guest at Castello di Gabbiano in September 2014. It was supposed to have been harvest week, but the fruit was still dragging itself toward the finish line of a cold wet season.

Staying on-site with a single producer for four days offers a chance to become fully familiar with a place—in this instance, a spectacular place, an 11th century castle and its surrounding Sangiovese vineyards in the heart of Chianti Classico. Being on-site also offers a chance to taste a wide range of the producer’s wines, from current releases to library vintages, and to see how they partner with the region’s cuisine.

If I must choose a favorite of the scores of wines tasted at Gabbiano that week, it would be the 2007 “Bellezza” Toscana IGT (later vintages of this wine are legally labeled Chianti Classico DOCG). The wine is 100 percent Sangiovese grown in the exquisitely tended Bellezza estate vineyard adjacent to the castle.

The 2007 was the color of clear red tea, blooming with an aroma of flowering herbs, like basil flowers crushed between fingertips. There was also anise, fennel, pollen; notes of game meat and tea; woodsy cypress; black fruits. The tannins were striated and taut, the finish was drying but pure. It’s a wine that reads like Tuscany in autumn poured into a glass, a soulful embodiment of that place’s elements.

How do you remember a place once you’ve returned home? Do you keep a notebook, take photos, tell stories? As a writer, I must continually remind myself that not everything is describable in words. As a former painter, I know that not everything can be faithfully drawn. Bellezza offered evidence that wine, too, can be like a sketch, a non-verbal description of a place’s details and filigree. And one taste later can bring it all back.

The Lesson: Wine is not just from a place, it is a diagram of place.