Philippe Chavy's wines present a delicious balance between opulence and verticality. Here, notes on eleven of his wines, from village to premier cru. 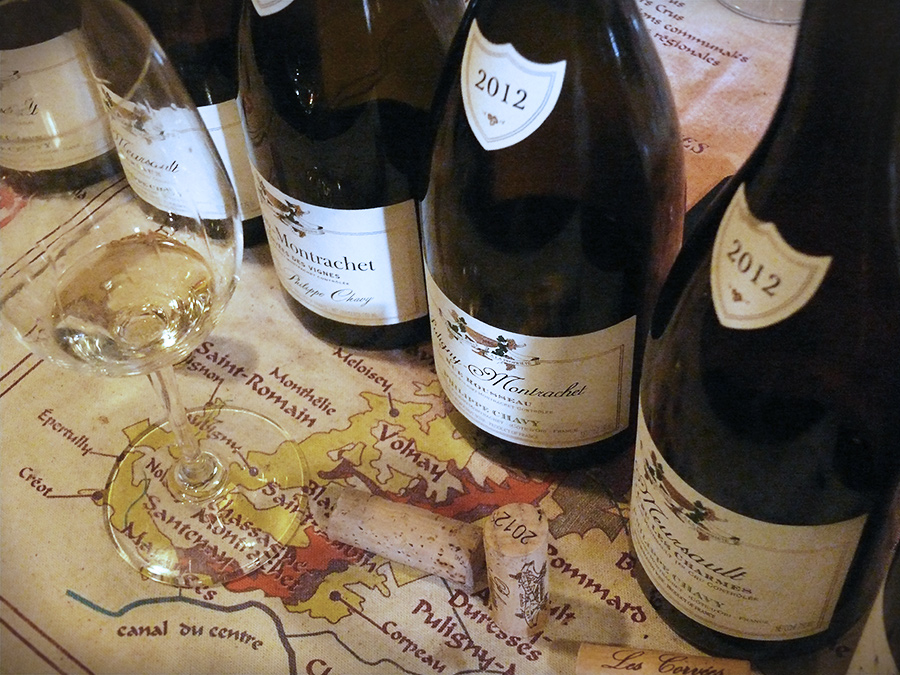 Our small group stepped blinking into the dark cellar of Philippe Chavy in Puligny-Montrachet. It was a sterling July day, resplendent with sun and smiling skies, a day that made it hard to imagine that four days earlier, a powerful hail storm had torn through Burgundy’s vineyards, shredding leaves and pummeling grapes, which now hung browning in the mid-day sun.

Chavy’s plots in Puligny-Montrachet, Meursault, and Saint Aubin were not affected, grâce à Dieu, but his empathy for his neighboring colleagues was palpable. This was the third straight season of hail in Burgundy, and the vignerons here were jumpy.

Chavy is a third-generation Burgundian winegrower. The majority of his Puligny vineyards were planted by his father in the 1950s, while his Meursault vineyards came to him from his mother’s line. Altogether, he now farms eight acres across thirty plots and fourteen named locations. (Such is Burgundy.)

His winemaking approach is a mix of old-school and new. He practices biodynamics in both field and cellar, but vinifies in temperature-controlled stainless and sterile-filters his wines at bottling. He acknowledges his good fortune—and his responsibility—in being able to farm some of the most magnificent Chardonnay vineyards in the world.

Indeed, the vast majority of his wines are white (a simple Pinot Noir Bourgogne accounts for only one percent of his production). In addition to his village and vineyard designates, he makes four Premier Cru wines: Puligny-Montrachet Les Folatières and Les Pucelles, Meursault Les Charmes, and St. Aubin Les Murgers de Dent de Chien. One of his vineyards, Rue Rousseau, a quarter-acre plot planted in 1955, abuts the Grand Cru vineyard of Bienvenues-Batard-Montrachet. Good clos make good neighbors.

I’d previously tasted several of Chavy’s wines—some members of our group had also visited him in 2011, returning home with wine in tow—but tasting his new releases was a revelation. His are big wines, voluptuous and silky, with mouthfilling notes of nut and beeswax. They’re not quite what I expected from a biodynamic producer in the heart of the Côte de Beaune. I expected nervy, challenging wines—leaner, and more like Chablis. More chalk and steel than butter and nut and cream.

But I did love them, or I loved most of them, because their ample presence is offset by great delicacy and precision, and a kind of taut verticality that balances their opulence. And because Chavy generously pulled wines from his library for us to taste—and because I was later able to taste wines my friends had cellared—I’ve also seen that they’re utterly age-worthy.

May the vintage always smile upon them all.

2012 Domaine Philippe Chavy Bourgogne Chardonnay
Somewhat reduced at first, almost oily; I’d have guessed it was Riesling if I’d tasted it blind. It has a slight tarry edge at mid-palate, and is light-textured with modest acid. Curious. (The best is yet to come.)

2012 Domaine Philippe Chavy Meursault
An opulent and oily wine, with salty beeswax and Asian pear. I think bottle age will elaborate it.

2012 Domaine Philippe Chavy Puligny-Montrachet 1er Cru “Les Folatières”
The nose is almost briny; I call it elegant. This is a different wine, less rich than the others, with crisp lines and a light body. It demands some years of age.

2012 Domaine Philippe Chavy Meursault “Narveaux”
Rich, creamy, and nutty, with caramel custard and nutmeg spice. It tastes like a crème brûlée with a spicy finish. I tasted it again in December of 2014, and found it extremely salty, with sage and laurel, daffodils, roasted hazelnuts, and brown butter. This wine offers an elegant balance between meadow sweetness and savory heft, and is clearly meant for aging.

2003 Domaine Philippe Chavy Meursault “Narveaux”
2003 was a difficult vintage, but this wine is both elegant and effusive. It smells like grilled caramel, and the palate offers Acacia honey, toast, old beeswax, and nuts. Truly lovely.

2009 Domaine Philippe Chavy Puligny-Montrachet “Rue Rousseau”
(Tasted December 28, 2014, in the U.S.): This wine has settled into itself; yellow-golden hued and redolent of butter, nut, and daffodils. It’s silky-textured and mouth-filling, and the palate offers white peach and a salty sage finish. This is big wine, very opulent and rich. We are partly tasting a prestigious Grand Cru neighborhood—and partly expert winemaking.

All wines except the 2009 Rue Rousseau were samples for review.
Follow my wine reviews on Vivino and Delectable.