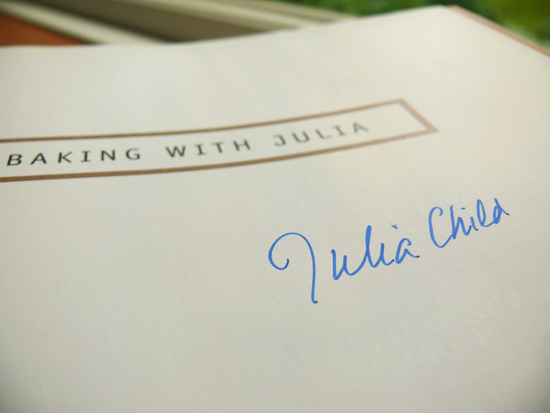 Julia Child would have been 100 years old today. She hasn’t been gone long; she died only in 2004, two days before her 92nd birthday, proving conclusively that one needn’t necessarily subsist on raw vegetables with dressing on the side to live to a hearty age.

I own a signed copy of “Baking with Julia,” shown here, and a weathered fifteenth printing, from 1967, of “Mastering The Art of French Cooking,” which I got at a church used book sale and which smells exactly like the stacks of my college library.

This is as close as I’ve ever really gotten to Julia Child qua Julia Child, though. I’ve yet to prepare any recipe from the cookbook. I don’t remember her television program, “The French Chef,” because I was only eight years old when it went off the air. I’ve never read her memoir.

But she is present in my kitchen by inheritance. Volumes have been written about her efforts to introduce American home cooks to French techniques. What’s less often noted is that in popularizing French cuisine, Julia Child also popularized the act of popularizing a cuisine. She was among the first to say that even if one was not raised in a particular culture, one could try out that culture for an evening—via Soupe à l’Oignon, Filet de Poisson Pochés au vin Blanc, Tournedos Sautés Chasseur, and Haricots Verts Gratinés à la Mornay.

Julia Child showed all of us that, yes, technique is important, but it’s almost beside the point. The point is to be fearless in the kitchen: to try, to taste, to share, to be fed, to smile satisfied afterward. And in the process, to become a little more broad-minded about the world.