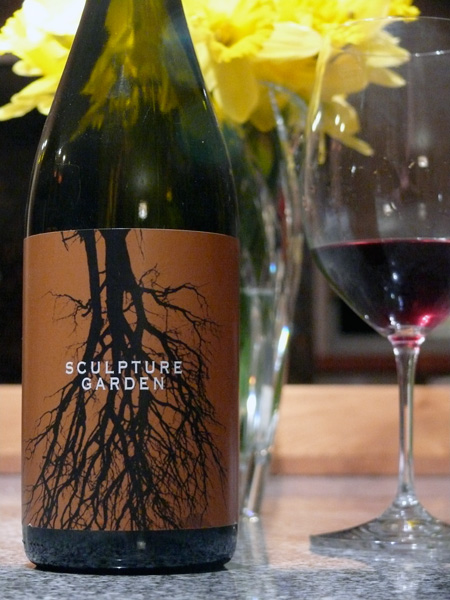 This wine is 88% merlot and 12% blaufränkisch, from a winery in the Hamptons of Long Island. Only 348 cases were made. My dear friend and confrère éternel Rémy Charest handed it to me the last time we met. I confessed to having never before had a Long Island red. This would be my virgin flight.

Held against the light, the wine is a nearly pearlescent suspension of fruit plus earth. Swirled in the glass, it gives bright, plummy, cherry aromas underpinned by a black toastiness that’s slightly savory. Medium-bodied in the mouth, it delivers juicy acidity, more red fruits, and black currant with a layer of spicy black pepper. The finish is long and faintly vegetal.

This is an elegant and balanced wine with an earthy, slightly funky catch in the middle. If you’d handed me a glass blind and asked me to place it, I’d have been utterly flummoxed. It does not have the gravitas and savory minerality of Bordeaux, nor does it have the heft and cleavage of California Merlot. It is not like Blaufränkisch, though it’s not unlike some of the German reds I’ve tasted. It’s lean and savory and a little wild tasting like some native North American wines. But it’s clearly not native, either.

It’s not Old World, and not wholly New. It’s from here: New York State. My mind is open.

*I received this wine as a gift.

Written By
Meg Maker
More from Meg Maker
“A pétillant-naturel Loureiro with no yeast or sugar addition...”
Read More