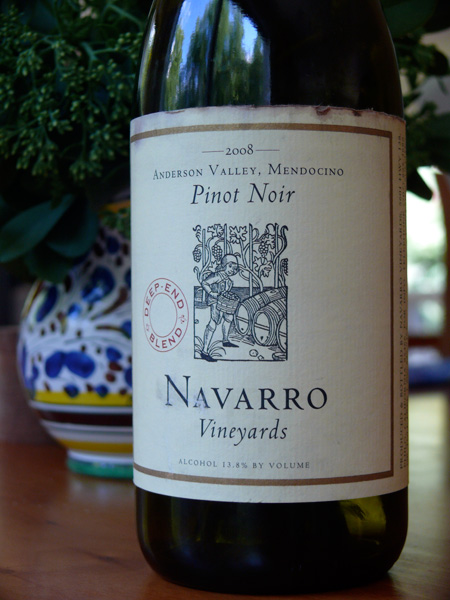 “Dear Navarro Friend,” the letter began, “We need your opinion, which is why we are sending you this sample bottle at no charge.”

The friend in question is a friend of mine, a member of Navarro’s pre-release program. Last summer he purchased futures of this 2008 Pinot, and this September was to receive six bottles.

But 2008 was an unusual season in California, with over 500 lightning complex wildfires flaring up during June and July. Many vineyards were shrouded in smoke during fruit development, leading to fears of smoke taint, a complex and poorly understood condition in which compounds in the smoke penetrate the grapes’ skin and vegetation, influencing the flavor of the finished wine. (Read an excellent primer on smoke taint from Reign of Terroir, and an article on the 2008 wildfires from Wine Spectator.)

Mendocino County was particularly affected, as a thick layer of smoke lay over the vineyards for nearly three weeks. Pinot noir grapes, the kind in this wine, are thought to be especially susceptible to taint. “Reactions to the smokiness have been wildly varied,” Navarro’s letter continued. “One concerned friend sampled the wine, emptied it into the kitchen sink, opened a 2007 instead, and then wrote an impassioned email recommending that we recall the wine. The next day another faithful customer wrote us about the same wine: ‘I opened it with some trepidation because of the smoke issue. But I was happily surprised. There is no issue.'”

So, rather than simply bank the cash and ship the wine as previously agreed, Navarro decided to let its customers decide, shipping each a free single bottle, saying Try it. Let us know. If you like it, we’ll send it to you, knocking ten dollars off the price. If you don’t like it, we’ll credit you or ship a substitute.

Give Navarro a gold star for transparency, plus one more for customer service.

It’s smoky. Not a toasty-oak kind of smoky, not a caramel or vanilla smoky, but a minerally scorched-earth smoky, like charred vegetation, roasted landscape, woodsmoke, campfire. But the smokiness is evenly balanced with juicy ripe aromas of red fruit: it also smells pinot-y, varietally correct, with a fresh, brilliant edge. The smoke is there on the palate, too, but happily just one element of the flavor profile, adding a dark edge to this young wine.

The wine is fine on its own, interesting and almost, but not quite, a curiosity, because the smoke flavors aren’t overwhelming. But it really sang last night when we tasted it with a pork shoulder I’d been smoking on the grill for five hours. These two were perfect partners, the light-bodied Pinot a match for the pale, juicy center of the cut, and the smokiness marrying beautifully with the meat’s crackling outer layers.

The verdict? Ship it.