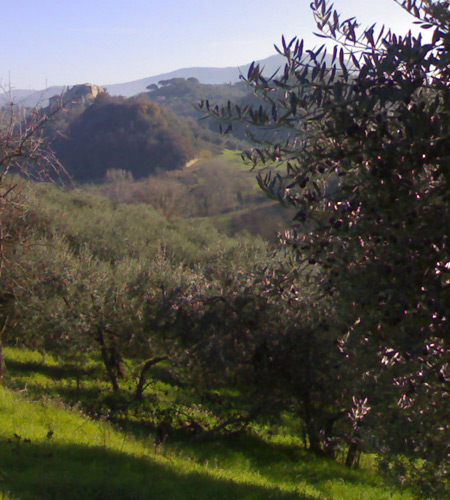 Angela Hall was born in Rome, though her family has deep roots in Sabina, an agricultural region just outside the city. Angela lives in the States now, but still imports her family's olive oil, grown on a farm called "La Cesarina" (above) that belonged to her grandparents, Giulio Luzzi and Elisabetta Cola Luzzi. The family picks the olives in mid-winter, last year harvesting well into January, climbing ladders and shaking the ancient trees to send a cascade of ripe fruit onto tarps below. These they transport to a nearby stone press, a frantoio, which is kind enough to press the farm's olives in an exclusive run. Last year the yield was about 12,000 litres.

I'm lucky enough to have some. It's bright gold-green, strongly fragrant and herbaceous. It offers the peppery catch on the back of the throat Italians call pizzicante, characteristic of younger oils. It's wonderful drizzled on fresh cheese, bread, or tomatoes. It's hard to bring myself to cook with it, because it seems so precious, but I often finish a dish with a swirl to bind the flavors.

I asked Angela what she tastes in the oil, and she said simply, "I taste the olives." Never having tasted ripe olives, this is as close as I can come.

If you'd like to try some of Angela's oil, contact me by posting below and I'll put you in touch.